Self-regulating. Shock just once a month.

Introducing the innovation of SmartChlor® Technology – the self-regulating chlorine that works together with FROG minerals in the easy to use @ease Floating System. Enjoy the benefits of Fresh Mineral Water® that’s cleaner, clearer, softer and easier™ to take care of with the unique properties of SmartChlor Technology that uses up to 75% less chlorine* and greatly reduces hot tub maintenance like shocking. 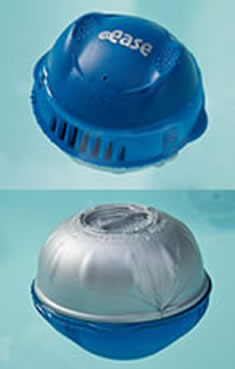 The @ease System combines the proven FROG mineral formula for killing bacteria with SmartChlor Technology that maintains a consistently low chlorine level for weeks. Unlike normal chlorine that is used up when you get in, SmartChlor continues to maintain the same level which is up to 75% less than hot tubs using Dichlor (standard hot tub chlorine). That’s why we call it self-regulating. It goes to work when the hot tub needs sanitizing so there is no frustrating yo-yo chlorine levels. This time-released method is also why less shock is needed to maintain the hot tub. When the SmartChlor Cartridge is depleted the system will flip over as a visual reminder to replace the empty cartridge with a new one.

Does the @ease system work as well as the chlorine system I’m using?

@ease is an EPA registered disinfectant so it’s gone through all of the rigorous testing standard chlorine went through. What @ease offers instead is a system with Fresh Mineral Water that automatically maintains cleaner, clearer and softer water for weeks at a time. The result is less work for you.

How can it work so well using so much less chlorine?

@ease uses minerals in conjunction with Chlorine so it kills bacteria 2 ways. This means no more bleached swimsuits or smelly odors.

The SmartChlor cartridge lasts a month, I get that. How long does the mineral cartridges last?

The mineral cartridge lasts four months or whenever the hot tub is drained and refilled. Just go back to your dealer buy a new @ease system.

Is an @ease system expensive?

SmartChlor is slightly more expensive than dichlor but less than other systems. Consumers who have tried it tell us it is SO worth the money:

-No constantly monitoring chlorine levels.
-No adding chemicals before and after using the hot tub.
-And no shocking for an entire month!

So you save time and the cost of shock treatments. And because @ease uses 75% less chlorine, it helps prevent faded suits and avoids the effects chlorine has on equipment and surfaces.

Can I remove @ease floater when I’m using the hot tub?

Yes. Simply set it on a surface that is not susceptible to bleaching and remember to replace it when you exit the tub.

@ease uses up to 75% less chlorine* than ordinary chlorine systems so the water feels softer with no bleached suits or smelly odors. No more shocking weekly or after every use. You only shock once a month.

Testing is also much easier with one color match for chlorine that tells you when to replace your SmartChlor Cartridge.
Only @ease offers the benefits of Fresh Mineral Water and the innovation of SmartChlor Technology. 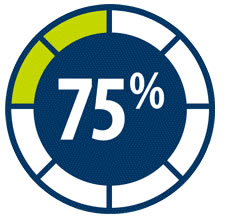